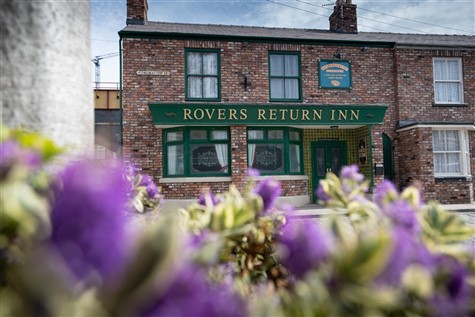 Sundy 29th MAy 2022: An Excursion to Coronation Street Studio Tour and Salford Quays with Whittle Coaches

Discover the stories behind life on the nation’s favourite street. Explore the sensational external sets at MediaCity UK on a guided tour which takes in Coronation Street, Rosamund Street and CVictoria Street. Stepping into the largest working television set in the country, become immersed in the familiar surroundings of the Rovers Return, Underworld and The Kabin as you follow in the footsteps of your favourite characters down the famous cobbles. Guided will share secrets from behind the scenes, point out locations of iconic story moments and give the latest low down on who lives where. We have free time in Salford Quays, Greater Manchester’s unique waterfront, with a whole host of restaurants, bars and attractions including the Imperial War Museum North, The Lowry Arts Centre and an outlet shopping mall with over 90 stores.