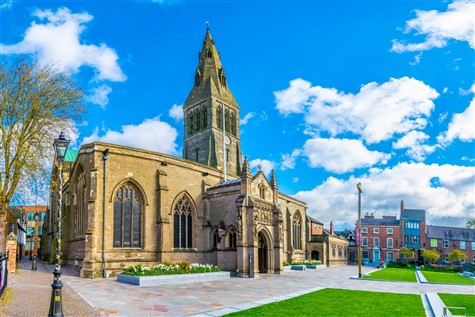 Following the discovery of remains in the car park, in August 2012, Leicester City Council purchased an old school building with the aim of creating a centre that would tell the story of the remarkable search for – and at that point unconfirmed discovery of, Richard III.  Today the building is a state of the art visitor centre, whilst retaining the character and features of the former school and overlooks the gravesite of the long lost Plantagenet King of England.  Using great storytelling, beautiful design and 21st century technology, the centre tells the fascinating and moving story of the king’s life and death and reveals one of the greatest archaeological detective stories ever told.  In Leicester, take a stroll down the cobbled streets of the Old Town, steeped in medieval history, with medieval Guildhall and of course the final resting place of King Richard III.  In the Lanes and St Martin’s Square, wander among a wealth of fine, independent shops and restaurants, and perhaps visit Leicester market, trading for over 700 years.