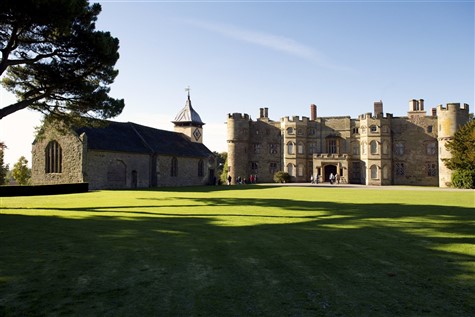 Situated on the English-Welsh border, Croft is a quiet, ancient place steeped in British history and politics with a picturesque castle and medieval parkland re-fashioned during the 18th century.

Surrounded by 1,500 acres of woods, park and farmland, Croft became home to a resilient and prominent family, beginning with Bernard de Croft in the 11th century. Later, Sir Richard Croft fought in the Wars of the Roses while Sir James Croft was rewarded with high office for his loyalty to Elizabeth I.

You will find portraits in the castle and memorials in the nearby parish church which record the many members of the Croft dynasty who served in later political and colonial positions.

Sir Archer Croft’s failed investment in the South Sea Company – which traded in African slaves – fuelled the family’s debts and eventually resulted in the Crofts losing their home. Croft was then sold to the ambitious Johnes family who installed elegant Georgian Gothick rooms overlooking the ancient parkland and built a walled garden, now housing a glasshouse, orchard and productive vineyard.

Walks and carriage rides created through the wider picturesque pleasure grounds of Fishpool Valley with its deep quiet pools, mill and grotto are all now undergoing an ambitious programme of restoration. Wider walks lead to the Iron Age hill fort of Croft Ambrey with magnificent far-reaching views to the Welsh Mountains.

Bought back by the Croft family in the 20th century, the castle briefly became a family home once more, even hosting a school during the Second World War. In 1956 it was secured for the nation. Today you will find a varied collection on display showing the many aspects of Croft’s history.

Sign up to our weekly e-newsletter by clicking here!